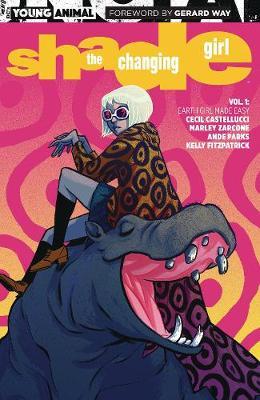 Part of Gerard Way's new imprint, DC's Young Animal! Far away on the planet Meta, Loma's going nowhere fast. She's dropped out of school, dumped her boyfriend and is bored out of her mind. She longs to feel things. That's where her idol, the lunatic poet Rac Shade, and his infamous madness coat come in. Loma steals the garment and makes a break across galaxies to take up residence in a new body: Earth girl Megan Boyer. Surely everything will be better on this passionate, primitive planet with a dash of madness on her side and this human girl's easy life. Only now that she's here, Loma discovers being a teenaged Earth girl comes with its own challenges and Earth may not be everything she thought it'd be. Megan Boyer was a bully who everyone was glad was almost dead, and now Loma has to survive high school and navigate the consequences of the life she didn't live with the ever-growing and uncontrollable madness at her side. Not to mention that there are people back on her homeworld who might just want Shade's coat back.
Written by Cecil Castellucci (The Plain Janes), drawn by Marley Zarcone (EFFIGY) and overseen by Gerard Way, SHADE, THE CHANGING GIRL starts a whole new chapter in the story of one of comics' most unique series. Collects SHADE, THE CHANGING GIRL #1-6. SHADE, THE CHANGING GIRL is a part of DC's Young Animal--a four-book grassroots mature-reader imprint, creatively spearheaded by Gerard Way, bridging the gap between the DC Universe and Vertigo, and focusing on the juxtaposition between visual and thematic storytelling.

Cecil Castellucci is the author of books and graphic novels for young adults including Boy Proof, The Plain Janes, First Day on Earth and the Eisner-nominated Odd Duck. She is currently writing SHADE, THE CHANGING GIRL, an ongoing comic on Gerard Way's DC Young Animal imprint. Her picture book, Granda's Gloves, won the California Book Award Gold Medal. She lives in Los Angeles.