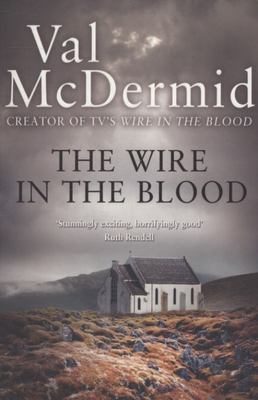 The Wire in the Blood (Tony Hill & Carol Jordan #2)

Val McDermid's Number One bestselling crime series, featuring psychological profiler Dr Tony Hill and Jacko Vance - protagonist of new novel THE RETRIBUTION - in the suspenseful and ferociously readable thriller that led to the much-loved TV show. Young girls are disappearing around the country, and there is nothing to connect them to one another, let alone the killer whose charming manner hides a warped and sick mind. Dr Tony Hill, head of the new National Profiling Task Force, sets his team an exercise: they are given the details of missing teenagers and asked to discover any possible links between the cases. Only one officer comes up with a theory - a theory that is ridiculed by the group ... until one of their number is murdered and mutilated. For Tony Hill, the murder becomes a matter for personal revenge and, joined by colleague Carol Jordan, he embarks on a campaign of psychological terrorism - a game where hunter and hunted can all too easily be reversed.

'The book [has] a sense of gravitas and intelligence utterly beyond lesser writers in the field ! This is a wholly satisfying read which cleverly subverts tradition and expectation' Ian Rankin, Scotland on Sunday 'This is a shocking book, stunningly exciting, horrifyingly good. It is so convincing that one fears reality may be like this and these events the awful truth' Ruth Rendell 'The Wire in the Blood is truly frightening, McDermid's capacity to enter the warped mind of a deviant criminal is shiveringly convincing ! Tony Hill, driven and disturbed, is an appealing and original character. This is a writer who just gets better and better' The Times 'Terrific chiller from Manchester's answer to Thomas Harris ! Thank God for Tony Hill and psychological profiling' Guardian 'Val McDermid is an accomplished storyteller, and this scary, fast-moving tale is engrossing' Daily Telegraph

Val McDermid grew up in a Scottish mining community then read English at Oxford. She was a journalist for sixteen years, spending the last three years as Northern Bureau Chief of a national Sunday tabloid. Now a full-time writer, she divides her time between Cheshire and Northumberland. Her novels have won international acclaim and a number of prestigious awards, including the Gold Dagger for best crime novel of the year, the Anthony Award for best novel, and the Los Angeles Times Book of the Year Award. Her thriller series featuring criminal profiler Tony Hill has been adapted into the much-loved TV series Wire in the Blood.